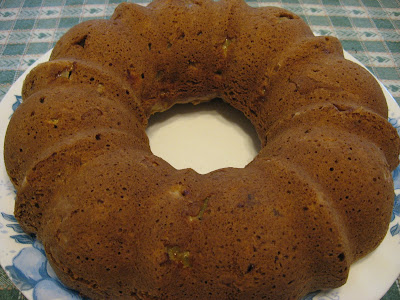 Best Ever, Fresh Apple Cake
Over twenty years ago, back before we bought our farm we were just beginning to awaken to the idea that suburban or town living may not be the best way to live for us. We really had only a fleeting idea of how a farm should be run back then, but we wanted to learn all we could so we were pleased have the opportunity I write about today. It was along about the time our youngest was reading in the Little House books about such things as harvestin' and hog killin' time that my sister, Sam invited us down for a weekend to her house in the country. It happened that her husband was friends with a pig farmer, and knowing we loved learning about the self-sufficient lifestyle she phoned to say that on a particular Saturday we would be able to attend a real-live hog killin' just down the road a piece from her home in middle Tennessee. We were pleased to accept the invitation.

Youngest was very excited over the prospect and finally the weekend arrived. We journeyed to my sister's house on Friday evening then the next morning we all started on our way to Mr. Bumfrey's house to watch our very first hog killin'. His well-hidden farm was several miles into the backwoods, far away from any neighbors and their sensitive noses. Now, Mr. Bumphrey was a renowned pig raiser in those parts and proved it each year by producing healthy, great big ol' pigs. We were made immediate witnesses of that fact as we pulled into their driveway. There were hogs there bigger than our car (for cryin' out loud!), and I noticed as we emerged from the car that it truly did smell like it might be an infamously huge pig farm. We had definitely arrived at our destination.

Youngest and her cousin stayed outside to watch the doin's while Sam and I went in the house to meet Mrs. Bumphrey. We said our hellos and started to work helpin' her fix a hungry-man's dinner for all in attendance that day. There was meatloaf to bake, pork chops to fry and various and sundry other dishes to prepare so we lent a hand with the cooking as it was needed.

Meantime, it was a chilly day in mid-autumn so I would check now and then to make sure Youngest was still wearing her jacket. The first time I checked she was watching the skinning of an enormous, Cadillac-sized hog. The air smelt of pig sweat and wet hair. Youngest and her cousin, Belle were obedient little girls, stayin' out of the way and all, so I returned to the kitchen for awhile. Then again, after about an hour or so, I went outside to see how the girls were faring. This time I found Youngest and Belle tossing an inflated pig bladder back and forth, laughin' and talkin' as they would when playin' with any regular balloon. They had been discussing how Laura Ingalls played with a pig bladder at hog killin' time and were feelin' mighty pioneer-ish themselves.

Back in the kitchen I noticed Mrs. Bumphrey had begun icing a freshly baked apple cake. It smelled so good! She said I could have the recipe after dinner if I found I liked how it tasted. I could hardly wait to try that cake. There was something so wonderful about the crisp autumn weather, the aroma of baked cinnamon from the cake and our upclose glimse of down-to-earth, nitty-gritty country doin's outside - all rolled into one that comes back to me every time I bake this cake, and it's always every bit as good as the first time I tried at the Bumphrey's pig farm. It's the best I've ever had.
Here's the recipe so you can try it too.

Grease and flour a Bundt or tube pan.
Preheat oven to 350°F.

Beat eggs and sugar in large mixing bowl. Add vanilla and apples and mix. Stir in oil. Combine all dry ingredients including pecans in another bowl and slowly add to sugar mixture beating after each addition. Batter will be thick. Spoon into prepared cake pan. Bake in preheated oven for 40-50 minutes. Let set until just slightly warm then put in tight container immediately to maintain moistness.
Glaze: If desired drizzle with a mixture of:
1 cup powdered sugar , 1/2 teaspoon cinnamon and a few teaspoons of milk - just enough milk to allow it to pour in a thick stream over cake.


I'm a little further along with the one sleeve than this photo shows, but hey, it was already taken...lol. I should be finished with the whole thing in another week or two. The pattern is Iced. Just click on the name for the link to the pattern. 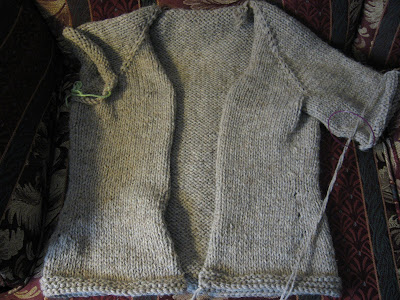 Now, I may not be able to show it then as most likely we'll be offline for a good several months by the time it's finished. Until then, take care, see you when our house is sold and we move and ..and, well see y'all later, the good Lord willin'. :)
Posted by magnoliasntea at Tuesday, October 19, 2010