Crumpled in a Heap

It was Monday afternoon, Goodman was still at work. The grandgals and Oldest were staying for dinner. Me, I was mindin' my own business, cooking supper for five today. Out of nowhere someone wields a knife. In a short moment I felt the sting of a sharp knife; then blood ickin' everywhere. In a panic I ran to the medicine cabinet and sink. I don't remember much else for the next hour except in a fog thinking... Peroxide. Supper is going to be a tad late. Bandage. Where's the neosporin? I have to stop this flow of blood. (It sure makes food preparation icky.)
Whodunit? Sadly, my own knife points an ugly, bloody blade back to myself. Fast forward. Goodman arrives and takes over the choppin' board. Punkin 1 has meantime fried some very tasty potatoes, and Punkin 2 is waiting to add cooked noodles and gravy to the leftover roast..if it ever gets chopped. Finally, Oldest arrives and when told the blood flow hasn't stopped, she says once she had a cut that wouldn't stop bleeding, and when she'd had enough of it...she smacked it. Huh? Really? Well, I'd had enough by now. Sure enough, the blood flow stopped. For real. Coincidence? I don't think so. Remember that; it could come in handy. 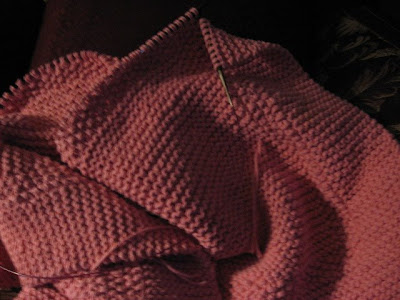 I was three inches from finishing the "everlasting bathmat." Maybe next week.

Posted by magnoliasntea at Friday, October 03, 2008